"You can't go in 'cause you're a cop in this town. You go in there without probable cause, they're gonna call it an illegal search. You know that. Or didn't they teach you that in cop school? "
―Axel Foley[src]

Det. Axel Foley is a fictional character, portrayed by Eddie Murphy, and is the main protagonist of the Beverly Hills Cop film franchise.

Axel was born on August 25, 1957 in Detroit, Michigan. He attended Mumford High School and became small-time juvenile hoodlum. After a few years in which he was unemployed, Foley joined the Detroit Police Department in 1983. A talented policeman, Axel is also known to bend the rules, which annoys his boss, Inspector Todd.

Sergeant Taggart: "Why didn't you identify yourself as a police officer when you were arrested? "
Axel Foley: "'Cause I was mindin' my own business. Hey, where the fuck do you guys get off on arresting somebody for getting thrown out of a window? "
―Taggart interrogating Axel[src]

Foley is delighted when he receives a surprise visit from his best friend Mikey Tandino, who lives in California. Unfortunately, Mikey is soon killed when Axel was bumped in the head, by a man named Zack. Foley goes to Beverly Hills, California, to find Mikey's assailant (since Mikey told Foley he had a job at an art gallery in Beverly Hills) where Beverly Hills Police Department Lieutenant Andrew Bogomil assigns Detective Billy Rosewood and Sergeant John Taggart to keep an eye on Foley. Where he made friends with the two detectives.

Foley visits his childhood friend Jenny Summers, who works at the art gallery. With Jenny's help, Foley discovers that Zack works for Jenny's boss, Victor Maitland, the man who owns the gallery. Maitland is a drug kingpin who is using the gallery as a front, and Maitland ordered Zack to kill Mikey after Maitland accused Mikey of stealing some of Maitland's bonds. Billy, Taggart, and Foley head to Maitland's mansion to apprehend Maitland. Foley and Bogomil simultaneously shoot and kill Maitland. In the end he also earned Bogomil's trust. Before he was about to head back to Detroit, he offered have a beer with Taggart and Rosewood, even though their still on duty. Taggart tells Billy, one beer won't hurt us. Rosewood said okay, Axel told the guys he knows a great bar to get a bar.

Detroit cop Axel Foley is watching the news on TV when the reporter tells a story that Foley's friend, Beverly Hills Police Department Captain Andrew Bogomil, has been shot by a tall woman. Foley heads out to Beverly Hills to visit Bogomil in the hospital, and this is where Foley is reunited with Bogomil's daughter, Jan Bogomil. Foley is also reunited with his friends Detective Billy Rosewood and Sergeant John Taggart. Rosewood and Taggart decide to let Foley help them find the woman who tried to kill Bogomil, even though abusive police chief Harold Lutz has been deliberately trying to find a reason to fire Billy and Taggart. Foley, Rosewood, and Taggart soon discover that the alphabet robberies, a series of robberies that have been going on in the area, are masterminded by weapons kingpin Maxwell Dent, and Dent had sent his fiance Karla Fry to try to kill Bogomil because Bogomil had been after Dent. With this information, Foley, Rosewood, and Taggart try to find Dent and Karla. They track them down and find out the alphabet crimes is about arms deal. Dent and Karla are about to make an arms deal with Nick Thermopolis in Dent's oil field, framed Charles Cane as the alphabet robber so no one suspect Dent was the mastermind was behind this. Foley, Taggart and Rosewood thwarted their plan, took out both Dent and Karla. Thermopolis and Dent's men are arrested. The Mayor fires Lutz for his abusive attitude and screwing this alpha crime case. The Mayor commended Foley, Taggart, Rosewood for their service and puts in a good word with Foley's boss. The Mayor promoted Bogomil who survived the gunshot wound and he is the new chief of Police. He said goodbye to his friends and head back home.

One night in Detroit, during a shoot-out at a chop shop, Axel Foley sees his boss, Inspector G. Douglas Todd, deliberately murdered by a man named Ellis Dewald. With his dying breath, Inspector Todd asks Axel "Axel, are you on a coffee break?" and tells him to "go and get that son of a bitch". The evidence at the scene points to Wonder World, a theme park in Beverly Hills, California. Foley does some looking around, and finds the killer's vehicle, which contains evidence of suspected counterfeiting.

In Beverly Hills, Axel is reunited with his friend Billy Rosewood, who tells Axel that John Taggart is now retired and living in Phoenix, Arizona. Rosewood is now the Deputy Director of Operations for Joint Systems Interdepartmental Operational Command and another word he is a big shot. Billy also has a new partner named Jon Flint. Foley checks out Wonder World, which is owned by Dave "Uncle Dave" Thornton. At Wonder World, Foley rescues two kids who are stuck on a ride that broke down, and after this, Foley is taken to see the park's head of security, Ellis Dewald, and Foley recognizes Dewald as Inspector Todd's killer. Flint refuses to believe this, because Dewald is one of Flint's friends, but in actuality, Dewald runs a counterfeiting ring that uses the theme park as a front.

Foley is also falling in love with Janice Perkins, who works at the park. When Dave gets shot by Dewald in the chest with his gun, Foley is accused of being the man who shot Dave after rushing him to the hospital. With the - rather reluctant - help of Billy, Foley sets out to prove his innocence and get revenge on Dewald and Sanderson. This results in a chase and shootout with Sanderson and Dewald's security men all across the theme park.

Finally, in the park's prehistoric world ride, Foley manages to kill Dewald but gets shot himself. As he sits down to recover, Agent Steve Fulbright, who had been helping Foley suddenly shows up after he killed Sanderson. Foley reveals that he has come to suspect that Fulbright is also involved in the counterfeit scheme. His suspicions are true, but as the corrupt agent prepares to shoot him, Foley jumps him, and in the ensuing tussle Fulbright is accidentally killed when his gun is fired. One of the shots, however, over penetrates and nicks Flint, who has just arrived having received a call and discovering Dewald's treachery who shot Dave; both are eventually joined by Rosewood, who has been seriously wounded by the security men.

In the end, Flint, Rosewood and Foley are all injured, Uncle Dave survived his gunshot wound and commended Foley, Rosewood and Flint for saving his life and take down the DeWald counterfeiting operation. Janice invites Foley to an upcoming Tunnel of Love Ride but not before the latest character of the theme park has been introduced—Axel Fox. 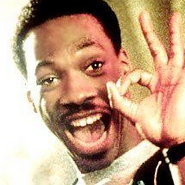 thumb|Foley as he appears in the first film

Axel on a Wonder Dollar

"Hey boss! The Chief ain't chewed it all off,you still got a little ass there."

Add a photo to this gallery
Retrieved from "https://beverlyhillscop.fandom.com/wiki/Axel_Foley?oldid=4616"
Community content is available under CC-BY-SA unless otherwise noted.